Having a little lady job shadow me was so cool.

i met Maitreyi about 2 weeks ago. i had wanted to post about this sooner because i was so energized by it. It put things in perspective to spend time with a youngin’ who is just approaching that higher-learning era of life. Those were great years for me, but i had a lot to learn and still do.

Maitreyi is 14, startlingly intelligent, and has great taste in bird patterned fashions. i had never taken on a padawan before, and i’m not the most confident person, which makes speaking in front of an audience for any length of time inherently risky. Justin knew how i was going to feel about it as soon as i told him what was happening: “How long is it going to take you to do your hair that day?” i’ll keep that information to myself, but i will say i had the entire afternoon planned out, down to frequent candy breaks.

In case you didn’t know, i work for the exalted Candy Industry magazine {read in 37 countries worldwide, what what}, so the night before Job Shadow O’Clock, i made sure my candy jar was stocked up with Maitreyi’s faves.

When i met Maitreyi, my first impression was that i was impressed. She didn’t seem unhappy to be spending the afternoon with some weird twentysomething artsy dork in an office building. She was obviously incredibly career-minded, but not in a nerdy way. In a, ‘wow, someday you are going to be making much more money than i am right now’ way. She was shy but cool. She asked me questions occasionally, and i tried not to be mind-numbingly dull. 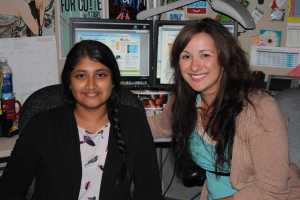 Me and my padawan designer.

We walked through my processes and worked on the October cover for Candy Industry, flowed in a page of Packaging Strategies, went over some web stuff, and discussed how everything is going digital, and how soon we’ll probably be trained to convert our print issues to iPad.

She showed me a little portfolio of design work that she had submitted competitively on a crowdsourced graphic design site. Her identity design was pretty rad, and she’s earned $500+ for her work in these contests. She introduced me to 99designs.com, a marketplace where amateur designers compete for a company’s project. At first i was skeptical: these sites have a tendency to undermine practicing designers who work hard to earn their professional status, and subsequently charge more for their highly educated and experienced skills. It is a decent stepping stone into the profession, however, especially for aspiring young misters and misses like Maitreyi. The fact that other designers can review your submission and repost their own designs accordingly teaches competitiveness {a skill i never quite got the hang of}, how to take criticism in stride, and how to capitalize on a job. 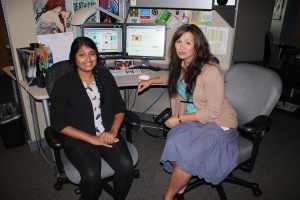 Goofy pic. Thumbs up, everybody for graphic design!

To be honest, i was pretty excited to have her fill out our post-shadow questionnaire. i wanted to know what she really thought of the whole experience. Some points of note:

• Like me, Maitreyi had thought the office would be much smaller. i remember pulling up into the parking lot on the morning of my interview, looking up at the 7-story glass building and thinking, “Well, this will be good practice for me.” It wasn’t until i learned that i would be working on a magazine dedicated to the confectionery industry that i got serious about the interview.

• She was overwhelmed by the amount of tasks and publications i have to keep track of. She said in another answer that she would be concerned about being able to keep up with all the deadlines and different pubs.

• She said that if she could change something, she would do more custom illustration for each issue. That was an inspiring answer, and i’ll definitely have it floating in the back of my mind. The only inhibitor there is lack of time.

• When asked if she’d want to work for BNP one day, she actually said NO! i panicked, thinking i had done her wrong and been too whiny or too boring. But she said she would be more interested in something like fashion merchandising. Which, to be fair, is not the same thing as publishing.

We ended the day with a little photo shoot, much to our embarrassment, with the intent to put us up on BNP’s Helping Hands program website. We parted ways with a hug and an iPhone pic. Hopefully i was able to show her something about graphic design in a more corporate setting, and paved the way for her to learn about our increasingly digital industry standards. To be honest, she’s already well on her way.

At least she got some free candy out of the deal.

{If you were 14 again, with the world at your disposal, what would you do different this time around?}